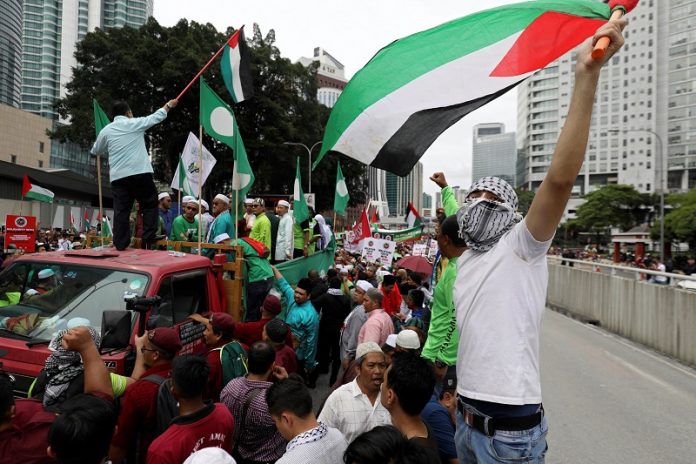 All Muslim countries are urged to cut off any type of relations with Israel, particularly in terms of diplomatic and economic ties to pressure the country to liberate Palestine and the city of Jerusalem.

It was among the 14 resolutions adopted by over 100 renowned Islamic scholars from 30 countries participating in the World Islamic Scholars Round Table Conference on Jerusalem, here today.

The conference coordinator Datuk Dr Mohd Khairuddin Aman Razali said the call was made following the actions of several Arab states that normalised relations with Israel by recognising the country’s new embassy.

“The road to liberate the Al Aqsa Mosque (Jerusalem) is to sever any political, business, educational ties and so on with the Zionist regime.

“If only one country does it, it will not give much impact. Malaysia can be the first country to adopt this move,” he told a press conference after presenting the resolution.

Mohd Khairuddin, who is also the PAS’ Institute of Strategic Studies director said the resolutions were submitted to Prime Minister Datuk Seri Najib Razak today and they will also be extended to all leaders of Muslim countries for follow-up action.

He said the resolutions also emphasised that the issue of Jerusalem and the Al Aqsa Mosque be included in the subjects taught at the school and higher level of education to raise awareness among young Muslims as the Jewish community have planted the ideology that Jerusalem was theirs from the very young age.

Meanwhile, Federal Territories Mufti Datuk Dr Zulkifli Mohamad al-Bakri said one of the resolutions passed in the conference was to designate 2018 as the year of Jerusalem, to inspire and motivate Muslims to liberate the city.

“There are many ways for us to build the unity of the ummah to apply concrete pressure so that Jerusalem will then belong to the Muslims,” ​​he said.

Syrian Islamic Council chairman Syeikh Usamah al-Rifa’i said that if all the Islamic scholars and leaders could focus and implement follow-up action based on the resolutions, it would be the first step to liberate the Al Aqsa Mosque from Israeli clutches.

The three-day conference, which began on Friday and held in conjunction with the MyAQSA Festival, was jointly organised by the MyAQSA Foundation, the Islamic Development Department of Malaysia (Jakim), the Palestinian Diaspora Scholars Union and the World Union of Muslim Scholars. — Bernama

PAS to be mediator to avoid GE15 multi-cornered fights