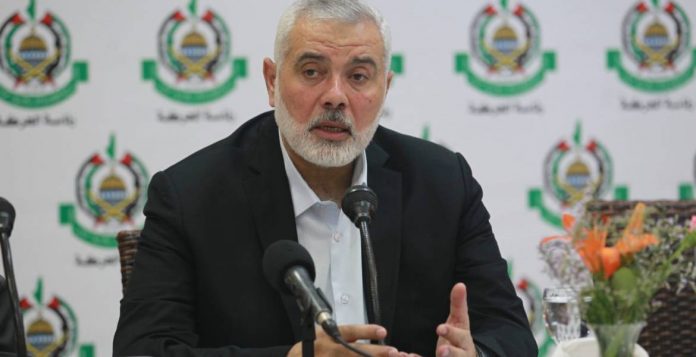 During a meeting with foreign reporters, Chief of the Islamic Palestinian Resistance Movement Hamas Ismail Haniyeh outlined on Thursday the goals and priorities of his movement.

“We want the world to hear from us, not to hear about us from the Israeli occupation,” Haniyeh told the reporters at the beginning of the meeting, which was simultaneously translated to English.

“We want only to give a truthful narrative about the Israeli crimes, which amount to war crimes, including killing, detention, erasing identities, settlement, use of lethal force against civilians and peaceful protesters,” he said.

Giving examples about the Israeli crimes, he said: “In Jerusalem, there is judaisation, house demolition, partitioning of Al-Aqsa Mosque, banning of Christian brothers from reaching the Church of Holy Sepulchre.

“In the West Bank, beside 100s of checkpoints, settlements, Separation Wall, the Israeli occupation is dividing it into cantons, cutting short potentiality to establish a contiguous Palestinian state.”

About these crimes, he said: “The Israeli occupation is ignoring all international resolutions and continue building settlements to bring more settlers. Going far from this, it is planning to annex these settlements.”

He continued: “Gaza, is under a 13-year-old siege because of the democratic choice; however, the elections which brought Hamas to power were monitored by international bodies, including Carter Centre.

Regarding the economy, he said: “The siege imposed on Gaza resulted in much suffering, restricted freedom of movement students, patients and everyone in Gaza. So that, the Palestinians thought of all means to break the siege, including the Great March of Return (GMR).

“Thousands took part in the GMR peacefully, but the occupation faced them with live ammunition and intentional killing –more than 300 martyrs, thousands wounded and disabled.

“We did not spare any effort to end Gaza siege, including the ongoing understandings,” he said. “We stick to these understandings, but we are committed to ending the suffering of our people in Gaza, affording a decent life for children, women, and youth, as well as to avoid any Israeli aggression on the Palestinians.”

Haniyeh said that the ongoing understandings are being mediated by Egypt, Qatar, and the UN and “Hamas respects these sides and respects their mediation.”

“This law aims to displace all the Palestinians in occupied Palestine and force them to West Bank, Gaza Strip or elsewhere.”

He added: “The Palestinians there are suffering from stealing of lands, demolition of homes and being banned from political participation.”

Haniyeh said: “There are more than seven million Palestinian refugees who have been deprived of uniting with their relatives, returning to their homes and enjoying their life.

“On the occasion of the International Refugee Day, we stress that all attempts to cancel the right of return will not succeed.”

However, he said: “Unfortunately, the international community has been unable to oblige the Israeli occupation to commit to the international resolutions, giving it a green light to continue harming the Palestinians and attempting to erase them from the past, present, and future.”

Haniyeh condemned the international silence regarding the Israeli occupation crimes against the Palestinians.

“Today, the international community’s silence towards the Separation Wall, settlement, Judaisation, etc.. is a green light to continue committing crimes against the Palestinians.

“More than this, some of the members of the international communities blacklisted Hamas. This is suppression to the people’s aspiration to freedom and liberation from the occupation.

“Some of the bodies on the international arena –some EU parliaments banned the peaceful resistance activities, including the BDS, such as the German parliament. We call for canceling it.”

Hamas proprieties in the coming stage:

About Hamas priorities, Haniyeh said: “Based on its being a resistance movement and part of the Palestinian people and the fact that it believes in democracy, Hamas is committed to

Regaining the Palestinian unity. Hamas proved this in different occasions, including signing several agreements and taking several actual steps, including conceding our right in the government which was formed in 2010 and letting Fatah leader form a unity government in 2014. However, our [Fatah] brothers did not commit to this.
We are ready to give all the concessions to achieve unity, but not to concede anything related to political principles.

About how to achieve unity, Haniyeh said: Holding elections, forming a national unity government, rearranging and rebuilding the PLO to include Hamas, Islamic Jihad and all factions.

Regaining consideration of the Palestinian national cause which is facing a threat due to Israeli conspiracies and plots.
We are working with all factions to regain this consideration based on the common principles –establishing a state on the 1967 borders with Jerusalem as its capital.

Deal of the century is one of the threats to the Palestinian national cause, annexing Golan Heights, giving greenlight to annex West Bank and retention of Gaza siege prove that the deal harms the Palestinian interests. So, we will not accept it.

Working to end the Israeli siege imposed on Gaza
We took all the paths to do this. We stick to the understandings despite the slow implementation from the Israeli occupation, but we stress that these understandings are in danger. We thank Egypt, Qatar and the UN for their efforts in this regard.

Resisting the Israeli occupation and undermining the annexation of the Israeli Jewish settlements in the occupied West Bank.
Palestinians will never accept conceding West Bank, Gaza Strip, and Jerusalem which is the capital of Palestinian state. Any attempt to annex the West Bank to be challenged.

Ending the suffering of Palestinian prisoners
In this regard, we work with all Palestinian factions on two paths:

liberating them
affording dignified life for them inside the Israeli prisons.
The Palestinian factions which did the prisoner swap in the past insist to continue this way.

Achieving the right to return
To achieve this, we have been rejecting any form of settlement for the Palestinian refugees in the countries they have been living in for decades.

Haniyeh stated exactly what is Hamas’s goal, counting them as:

The Migration Of Prophet Muhammad Is Not A Refugee

Press Release On Meeting Between Hamas And Islamic Jihad

When The Road Resurfacing Project (JPD) Can Be iImplemented?

The Tarbiyah Of Ramadan, Do Not Stray From Human